…and here they are!

The 3 Amigos had quite the adventure with my friend, Barking.  She lives in Victoria, not far from Melbourne.  I’ve learned quite a lot through the boys’ tour down under.  I thought kangaroos pracically lived in everyone’s back yards, but apparently they are not seen that often and are difficult to photograph, as they seem to disappear as soon as someone takes out a camera.  So, this shot of the 3 Amigos and their friend Bluppet Cousteau with real kangaroos in the background is quite a treasure.

The boys also got to go camping in the wilds of Australia.  My boys, the bushwhackers!  They then got to visit a very beautiful part of the country – Echuca, on the banks of the Murray River.  They posed in front of the Emmy Lou, a paddle steamer that travels up and down the river.

My bushwhacking adventurers, in the wilds of Australia. 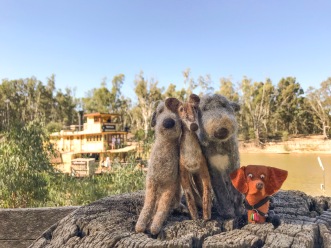 Relaxing after their camping trip in front of the paddleboat, Emmy Lou.

More adventures to come, including a trip to beautiful Melbourne.

3 Replies to “I promised you Kangaroos”